When Nick Hornby’s newest novel, Funny Girl, opens with the protagonist Barbara Parker winning the Miss Blackpool beauty pageant in 1964. Parker quickly discovers that the honor requires her to stay in Blackpool, in northern England, for a year to promote herself and her title, and she hands the crown off to the runner-up and makes her way to London, hoping to make it big as a comedic actress. Her doubting father, who raised her from a child after her mother left, is left behind.

Comedic roles for women in London are few and far between, so Barbara takes a job at a cosmetics counter at a department store. There, she meets an agent who convinces her to change her name to Sophie Straw; “Barbara” is seemingly just too pedestrian. Ironically, Sophie’s hardship is that she is painfully beautiful, an attribute that is apparently a detriment in the world of comedy. Her agent only wants to use her in roles where she is required to look pretty, but all she wants is to make people laugh.

At an audition for a television show, Sophie makes such a strong impression on the producers that they re-work the entire script to allow her to be the main character – much like Lucille Ball and much to the dismay of her male co-star. They are searching for the perfectly average name for the character and ironically settle on Barbara. So Sophie once again is a small-town Barbara on this new BBC comedy show, which becomes an instant success. Years go by, and tensions between the cast and the writers escalate and egos begin to get in the way of accomplishment. We watch Sophie struggle through the tribulations that ostensibly come with fame: romantic relationships, family problems, and jealousy. All the while, she continues to be a trailblazer, breaking down the glass ceiling and climbing higher than she ever dreamed.

Even at 450 pages, Funny Girl is a quick, fun read. The characters surrounding Sophie are highly entertaining and relatable, keeping the story moving. My only complaint was that we don’t actually get to watch the show that Sophie is filming. Hornby makes it sound hilarious, which of course makes the reader want to pull up a chair and start from episode one.

Nick Hornby is the author of the bestsellers About a Boy and High Fidelity, both of which were made into feature films. He was nominated for an Oscar for his screenplay for An Education. 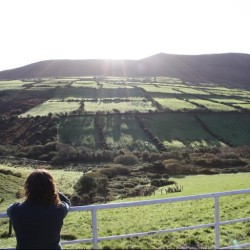 Cristen studied English literature at Mercy College and earned her MA while working at a publishing company, proofreading scholarly articles for medical journals. She lives with her husband in Pearl River, NY.